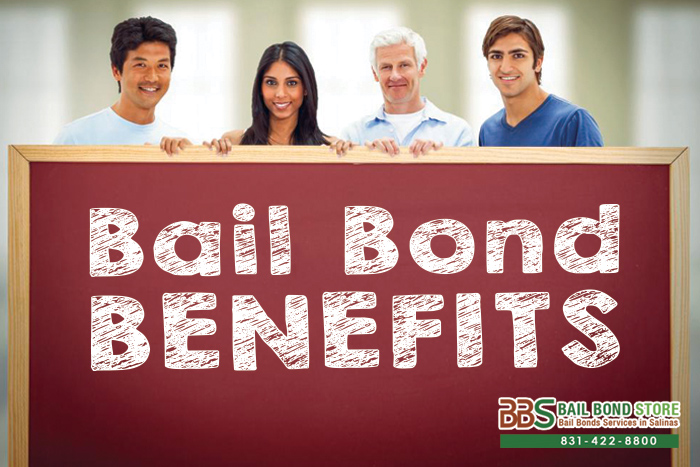 When we think of posting bail, we generally think of the negatives: paying a lot of money to someone else because you or your loved one did something wrong and got caught for it. But there are a number of really incredible and often overlooked benefits to paying for a bail bond, aside from getting a person out of jail.

Plus, if you post bail with a bail bond, instead of cash bail, you will save way more money because bail bonds cost only 10% of the full bail amount for cash bail. And this 10% is spread out over a payment plan, unlike cash bail that is paid all at once, up-front, before the defendant is released. And likely in relation then, bail bonds will get a defendant out of jail faster than cash bail since the money for bail bonds is not immediately required up-front.

Don’t hesitate – go the bail bond route! Get Salinas Bail Bond Store on your side to help you by chatting with a rep online or by calling 831-422-8800. Consultation with one of our knowledgeable bail agents is FREE, so you have nothing to lose if you call to inquire. Ask about our no down payment bail bonds and discounts we offer, along with your inquiries. Our bail agents work around the clock, so call us no matter what time you need bail help. You can count on us to be there for you.